The Buddha Loves You 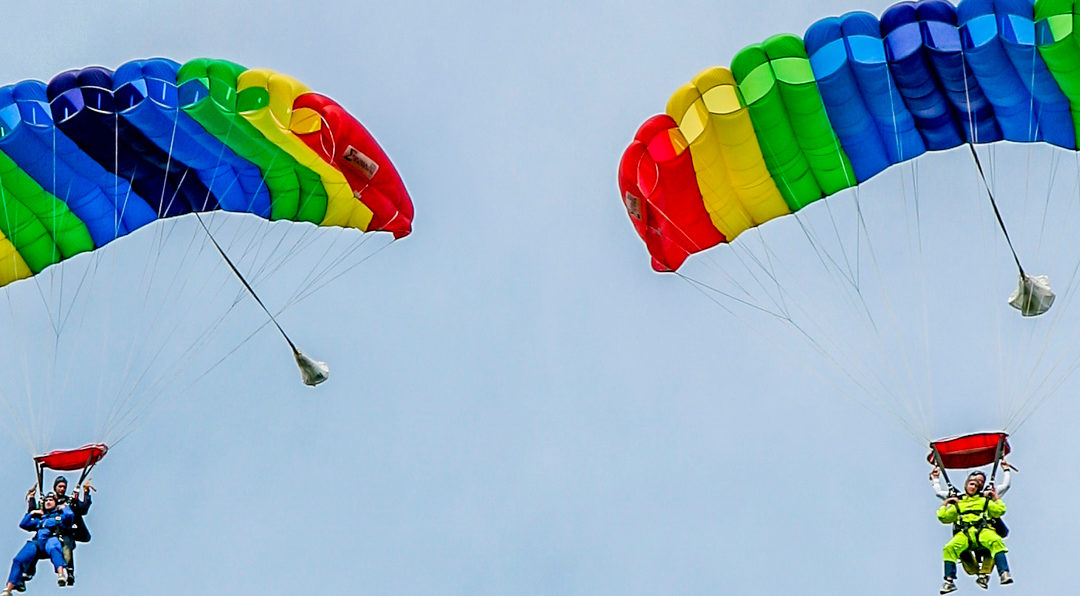 “When you are in free fall,” Utah warned me, “you may feel like you can’t breathe. You can. Just close your eyes and smile.”

The tips of my sneakers were at the airplane’s open door and the wind was in my face. I was strapped into a kind of spooning position with Utah, since New York law requires novices to skydive in tandem with an instructor. I had decided this was my favorite New York law. Utah was about six-foot-four, of Paul Newmanish appearance, and had possibly been genetically engineered to reassure me. He was, he’d informed me, the instructor they sent out with paraplegics and the elderly.

I averted my eyes from the reeling landscape and fixed them to the wing of the Twin Otter. We were the last ones to jump. I had already watched the other skydivers tumble out, howling with joy and followed by videographers. Everyone at Skydive the Ranch seemed to be there with a birthday or bachelor party, except me, which might have been why I got the special needs instructor. I wanted to tell Utah that I really did have friends. Peekaboo wanted to come, but she had to pole dance, and Colin backed out because of Hummel’s Piano Trio Number Five.

Skydiving was the last thing on my Two-Kidney Bucket List. For a year, I had been taking the tests required to be a living organ donor for my mother, whose kidneys were barely functioning after sixteen years of lithium for bipolar disorder. A prophylactic transplant would save her from, in the words of a friend, “the living death of dialysis.” Finally I’d finished all the bloodwork, urine tests, pap smears, mammograms, CAT scans, and EKGs. Our transplant was scheduled for the following week.

I had gotten the idea for the Two-Kidney Bucket List while surfing the Web for surgical horror stories and morbidity rates. A page on the Kidney Foundation website offered the following advice:

activities best avoided by people with only one kidney include: boxing, field hockey, football, ice hockey, lacrosse, martial arts, rodeo, soccer and wrestling…may also include extreme activities such as sky-diving.

Some of these I’d already gotten out of my system: soccer as a child, field hockey and lacrosse in high school, martial arts and boxing in my twenties. Over the last month, I’d been checking off the rest of the list. My football experience consisted of lunch with Everson Walls, the great NFL cornerback, who had donated a kidney to his former Dallas Cowboys teammate, Ron Springs. I had originally asked Mr. Walls to throw a football around with me, but he clearly considered this request ridiculous and possibly inappropriate, so I settled for a stimulating discussion about interceptions, racial politics, and Tom Landry. I wasn’t being rigid about the Bucket List; “ice hockey” was a survey of classic and contemporary video games curated by my brother Dan. We scored the games on a ten-puck system, the winner being NHL Slapshot with its authentic icy feel. For rodeo, I rode the mechanical bull at Johnny Utah’s in Midtown.

I covered my bases with both amateur and professional wrestling. First I ran the food concession at a girls’ freestyle tournament organized by a nonprofit called Beat the Streets. This was a surprisingly moving experience. Next, I traveled to Atlanta for a professional wrestling lesson with “Number One Cocky” Sonny Siaki, a muscle-bound Samoan who had retired from the ring to give a kidney to his brother Bernard. Sonny was adorable and chivalrous; at no time during our lesson did he slam me to the ring neck-first in his signature move, the “Siakalypse Now.”

All that remained was skydiving, which I had considered skipping. I am crushingly afraid of heights, and I do not like sports that involve speed. I would never have entertained the notion of jumping from a plane had it not been included on that Kidney Foundation list.

It was hard to tell where my husband stood on this issue: whenever I brought up skydiving, he began radiating the benign indifference he normally reserves for housework. Everyone else was horrified. My mother didn’t know, and I wasn’t going to tell her until I was safely on the ground. When I’d broached the topic a few weeks prior, she’d sounded stricken.

“What if you die?” she asked. “What will happen to my kidney?”

This made me a tiny bit mad. It wasn’t her kidney yet. I had a week left with Odysseus, and I intended to show him a good time. I had named my left kidney Odysseus, because he was going on a heroic journey back where he came from.

My right kidney, the one I was keeping, was called Mike Tyson. People don’t think of him this way, but Tyson was small for a modern heavyweight, just five-eleven and less than two hundred and twenty pounds in his prime. My right kidney only weighed a pound, but it could take out kidneys twice its size.

When Mike Tyson talks about Cus D’Amato or pigeons or fighters of the classic era, he reveals an intelligence that is startling, even to those of us who know that intelligence is required to throw a great left hook. Sure he’s bitten some ears. He’s bipolar, like my mom. Bipolar people do crazy things sometimes, but that doesn’t mean you stop loving them.

Mike Tyson, Odysseus, and I were perched to jump at the airplane’s edge.

Utah was yelling over the wind: “We go on three! One…”

On the flight up, I’d confessed my fear of peeing my pants, or worse.

“You can’t physically pee,” Utah had replied. “And you can’t poop, and if you were having sex in the airplane—pardon my language—but when you get to that door, you’re not having sex any more. It’s fight or flight. The blood goes to your muscles and brain.”

He had also said my crushing fear of heights would not be an issue, since we were thirteen thousand feet up, too high for accurate depth perception. I was shocked to find that this was true. I felt none of the bodily terror I experienced on high ledges and rooftops. The ground looked distant, abstract.

You don’t fall from the edge, and you don’t jump. You push your feet back and arch, leaving the airplane behind.

I felt Utah unhook my arms from their death grip on the harness. He moved them into ninety-degree angles, like the arms of a cactus.

The overpowering sensations were of noise and cold. Utah’s hand appeared in my blurry peripheral vision. He yelled single words over the wind’s roar.

He pointed to trees.

He pointed to fields.

He pointed to trees.

He moved my cactus arms to the left and then to the right so we spun in freefall. We plummeted for six thousand feet, but it didn’t feel like falling. It felt like being suspended in a vast wind tunnel, like being the man in that old Maxell ad, blasted back by sound. My eyes watered beneath the goggles and my hands went numb within the double-layered gloves. I was relieved when Utah guided my right hand back to his hip. Together, we grasped the golf-ball-sized handle of the ripcord. We yanked.

The only way I knew how fast we’d been falling was by how fast we stopped. In the sudden silence, the unfurling parachute sounded like flying birds.

Utah removed my goggles, and I blinked at the vista.

“Now we can talk,” he said softly. “Congratulations, you did a wonderful job.”

He loosened something, and I sat back into the parachute harness. I was slack with aftershock and could not stop giggling. I thanked Utah, again and again. I wanted to thank everyone I had ever known.

All around us, other skydivers hung suspended from their primary-colored chutes. I gazed down at the darling meadows of New Paltz, a village in upstate New York that I would later describe as “somewhere on Long Island”; once I leave New York City, I never know where I am.

When I was six years old, I asked my mother what religion we were, and she told me, “We are Jewish atheists,” an answer that got me into hot water with Girl Scout management. To this day, if you put a gun to my head and asked my faith, I would probably say, “None,” but as I floated above the farmland of what I believed to be Long Island, I felt somehow religious. After thirty-seven years, Odysseus was going home, but first I had taken him for a ride.

Utah said, “Let’s go in for a show landing.”

We did some fancy spins in front of the other skydivers.

“Lift your legs!” he commanded. “Press down!”

We skidded to earth on the seats of our jumpsuits, and I saw a white and yellow parachute land in our wake. As he helped me to my feet, Utah an-nounced my kidney donation to all the other skydivers. Everyone applauded. I got embarrassed and cried.

Strangers came up and hugged me, and one of them said, “You could shoot a bus full of nuns and still go to heaven.”

Sarah Deming, who lives in Brooklyn, is the author of the children’s novel Iris, Messenger. She is also a Golden Gloves boxing champion.

Please Read Before You Book Your First Jump Course!

You MUST be below 225 lbs to jump our student skydiving gear.

If your weight is below 225 lbs please click the link below to proceed with your First Jump Course Booking!

If you have ANY questions please do not hesitate to call one of our friendly manifest staff.

They will be happy to answer any questions you have regarding your tandem skydive.